Does Likelihood of Confusion Exist Based on a Common Weak Element?

The Turkish Court of Cassation (‘CoC’) upheld lower court decisions which ruled in favour of cancelling the Turkish Patent and Trademark Office’s (‘Office’) Re-Examination and Evaluation Board’s (‘Higher Board’) decision for invalidation of the ‘Mazstar’ trademark on the basis of likelihood of confusion with the plaintiff’s trademarks bearing the common element ‘Star’.

The defendant filed an application before the Office for ‘MAZSTAR’ in classes 29 and 30. The application was opposed, relied upon prior registrations bearing the phrase ‘STAR’ in classes 29 and 30, by the plaintiff company Yıldız Holding Anonim Şirketi. The Office totally rejected the opposition and appeal and Yıldız Holding Anonim Şirketi filed a cancellation action based on the likelihood of confusion between the trademarks and on the well-known status of its earlier trademarks.
Before examining the details and analysis of the case, the trademarks of the parties can be seen in the chart below: 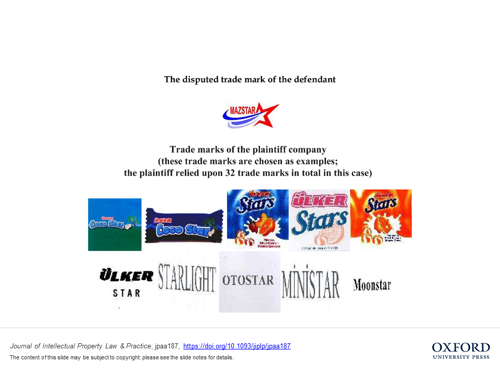 The court of first instance (‘the IP Court’) determined that the trademarks cover identical goods in classes 29 and 30, and that the main and distinctive element of the disputed trademark is the phrase ‘STAR’, since the phrase ‘MAZ’ has no meaning in Turkish and it does not distinguish the disputed trademark from the plaintiff’s trademarks which are basis of opposition in any semantic, visual or aural aspects. As a result, the IP Court decided to accept the case (Ankara 2nd IP Court, Merit No: 2017/260 E., Decision No: 2018/127 K., Decision Date: 21 March 2018).

The matter was finally reviewed by the COC upon further appeal. The 11th Civil Chamber of the CoC upheld the decision of lower courts. Accordingly, the CoC refused the Office’s appeal and approved the first instance IP Court’s decision (11th Chamber of the CoC, Merit No: 2019/3006 E., Decision No: 2020/841 K., Decision Date: 03 February 2020).

The CoC’s decision can be assessed by focusing on two aspects: (i) weak distinctiveness of the phrase ‘STAR’, (ii) overall assessment requirement for evaluating likelihood of confusion.

In the present case, the CoC granted protection for the plaintiff’s trade marks by ignoring the weak distinctiveness of the phrase ‘STAR’ and without making an overall assessment by considering all the elements of the parties’ trademarks.

The online system of the Office reveals 8945 trademark records bearing the phrase ‘STAR’ and 1041 of them cover the goods in classes 29 and/or 30. In fact, the phrase ‘STAR’ has a settled meaning in Turkish and it is widely known from the Turkish consumers’ perspective as well. Therefore, the decision of the CoC is questionable considering the weak distinctiveness and dilution of the phrase ‘STAR’, since it ruled before bearing one weak-distinctive common phrase may not be sufficient for trade marks to be confused, even if it is the main element of the trademarks concerned.

As it is stated in EUIPO Convergence Programme CP5, when trademarks have a low distinctive element in common, the comparison should be based on the non-common element. However, it would be a mistake to entirely accept that common low-distinctive elements never cause a likelihood of confusion between the trademarks, since the trademarks should be taken into account as a whole (Ilanah Fhima and Dev Gangjee, The Confusion Test in European Trademark Law (OUP 2019) 91–92).

As it is widely known, the overall assessment is one of the key principles of evaluating the likelihood of confusion and it is more crucial for the cases where the common element has weak distinctiveness. When evaluating the likelihood of confusion between two trademarks which include the same weak distinctive phrase, the impact of non-common elements on similarity should be considered, depending on the circumstances of every case. This approach is also adopted by the CoC.

However, for the subject matter, the CoC ignored the other word and device elements of the trademarks apart from the ‘STAR’ phrase. The question of why the weak distinctiveness of common element does not eliminate the likelihood of confusion should have been answered by the Courts in this case.